Sophie Tucker became best known for performances that expressed her humorous and frank approach to sexuality. Many of her "hot numbers" were written for her by Jack Yellen.  "I'm the Last of the Red Hot Mamas," a Yellen song which Sophie recorded in 1929, soon led to her signature billing as "The Last of the Red Hot Mamas," and became part of her legacy. Other songs like “I’m the 3-D Mama with the Big Wide Screen” and “I May Be Getting Older Every Day (But Younger Every Night)” also challenged stereotypes of women’s sexuality.

With a keen understanding of the human psyche, Sophie insisted that these songs brought people laughter "... not because they were funny or risque, but because they express some truths which all of us know, deep down in our hearts, and which a lot of us are afraid to mention above a whisper even to ourselves." 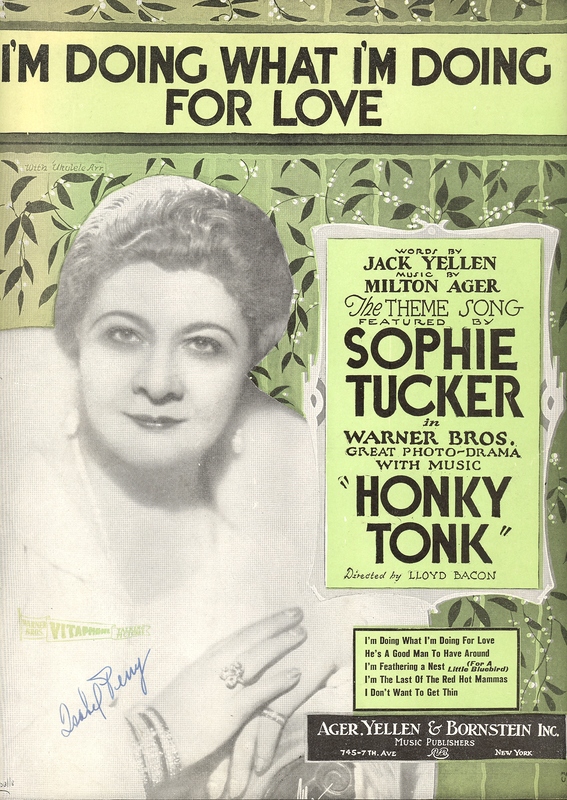 As times and entertainment styles changed, Sophie Tucker adapted by trying out both motion pictures and radio.  She made her first "talkie," Honky Tonk, in 1929, which flopped. But upon returning from Europe in the mid 1930s, she decided to give film another try.  Performing at the Trocadero Cafe in Los Angeles, she ingratiated herself with Hollywood stars and secured roles in a few more films: Broadway Melody of 1938 (1937), Thoroughbreds Don’t Cry (1937), and Follow the Boys (1944). But she never flourished in this medium, without a live audience. She complained that the director was "the only critic to be pleased."

As theater made a comeback throughout the 1930s and 1940s, Sophie performed her unique brand of singing and comedy on stage and in cafes. She also had a number of Broadway successes, including the 1938 musical comedy "Leave It To Me." That same year, she was given a 26-week engagement on the radio, a contract she worked hard to land. She understood the value of this popular medium, believing that it took "entertainment to the people wherever they are."

Sophie Tucker as the mystery celebrity guest on What's My Line? in 1957

Throughout the 1950s and 1960s, Sophie also made frequent television appearances on the "Ed Sullivan Show," "What's My Line," and the "Tonight Show."  She was so famous in England that when The Beatles appeared at a televised Royal Command Performance, Paul McCartney joked that "Til There Was You" was first recorded by their "favorite American group, Sophie Tucker."

The Beatles perform "Til There Was You" at the Royal Command Performance, 1963