Skip to content
Get our Newsletter
Join the Jewish Historical Society

Please note: Items may be added to cart at the very bottom of this page .

Order online below or if you prefer to print an order form, click here.

Researched by the JHSGH staff

This pictorial history volume is part of the Images of America series from Arcadia Publishing. The Images of America series celebrates the history of neighborhoods, towns and cities across the country. Using archival photographs, each title presents the distinctive stories from the past that shape the character of the community today. The archival images and expanded captions in the text were complied by the Society staff and volunteers. The book highlights some of the people, organizations and institutions that have helped to shape this remarkable community. Included are interesting facts about notables such as Sophie Tucker, Norman Lear, Sol LeWitt, Kid Kaplan and many more. The evening will also feature a number of storytellers presenting their most compelling Hartford stories.

Revisiting Our Neighborhoods: Stories from Hartford’s Past

In 2009 the Jewish Historical Society published Remembering the Old Neighborhood, a collection of stories about growing up in Hartford’s North End. This new anthology also includes stories set in Hartford’s North End as well as in downtown, the South End, and the West End. The 135 contributors to this collection fondly recall immigrant relatives, hard-working parents, and life during the Depression and World War II. There are unforgettable stories of family businesses, public school and yeshiva, the joys and challenges of childhood and young adulthood, and the devastation of natural disasters. The universal appeal of these stories is that they conjure up the strong and everlasting bonds of friendship, family, and community.

A History of Jewish Connecticut

During the Revolutionary War, Sephardic Jews fled British-occupied New York to become the first Jewish families in Connecticut. This long Jewish history is explored in a collection of essays by historians and community members across the state, from colonial times and the role Jews played in the Civil War to memories of summer nights at Lebanon’s Grand Lake Lodge and Danbury’s Lake Waubeeka. Join Editor Betty N. Hoffman and company as they recount tales of “Kid” Kaplan, the Meriden Buzz Saw, who became boxing’s 1925 Featherweight Champion of the World; the Lender family, who “bagelized America”; and the graceful personal service of Marlow’s Department Store.

A Life of the Land: Connecticut’s Jewish Farmers

This journal, the fourth in the Connecticut Jewish History Series, focuses on the lives of Jewish farmers in Connecticut and has been published by the Society with funding from the Connecticut Commission on Culture and Tourism. Co-edited by Mary M. Donohue, Architectural Historian, Connecticut Commission on Culture and Tourism, and Briann G. Greenfield, Associate Professor of Public History at Central Connecticut State University, A Life of the Land: Connecticut’s Jewish Farmers begins historically with the migration of Eastern European Jews through America’s cities and then to the Connecticut countryside. Why Connecticut? How did these immigrants operate successful enterprises with little or no farming experience? Who and what helped support and sustain them? The story of the resilience and persverance of these Jewish farmers and how they impacted their communities is told through historical data, oral history interviews and unique photo essays.

Remembering the Old Neighborhood: Stories of Hartfordï¿½s North End, is the culmination of a two year project to collect and preserve both the essays and oral histories of those who grew up in the North End of Hartford. This neighborhood was a unique multi-cultural, multi-racial and multi-ethnic melting pot. Most of the participants have since moved away, but a few still reside in the same homes in which they grew up. Some of the narrators were in their 90s and remember trolley cars and deliveries by the ice man. Younger narrators shared stories of the riots that rocked the area in 1968 and changed it irrevocably. Their lives are represented in approximately 150 entries that deal with work, play, school, world events, family, and friendship.

Honoring the Past: Building the Future:
The History of the Jewish Federation of Greater Hartford

Since 1945, the Jewish Federation of Greater Hartford has been the central address of the Hartford Jewish community. Over the past half century, scores of volunteers have worked to raise and distribute more than $200,000,000 for humanitarian needs for Jews at home and abroad. Honoring the Past: Building the Future traces the Federation’s history and highlights the people, events, and projects that have enhanced, built, and perpetuated Jewish communal life in Greater Hartford, in Israel, and around the world. 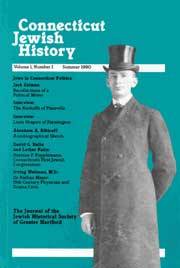 The first issue of Connecticut Jewish History is devoted to the Jews in Connecticut politics on the national and state level. Our political leaders were first generation Americans. From moderate Republicans to liberal Republicans, from moderate Democrats to liberal Democrats, these public servants believed that their Jewishness was somehow linked to their concerns for justice. We are grateful to the late Abraham Ribicoff, the most prominent Jewish name in Connecticut politics, for an autobiographical sketch in which he describes how his Jewishness became part of his political experience. This issue also includes a fascinating, non-political portrait of a 19th century Hartford physician, Nathan Mayer, who was a major Hartford figure, noted not only as a surgeon in war and peace but also as a drama critic and popular after-dinner speaker.

David G. Dalin is former associate professor of American Jewish history at the University of Hartford.

Lothar Kahn (1923-1990) was professor emeritus at Central Connecticut State University. Kahn was a noted author of many articles and books, including Mirrors of the Jewish Mind, Insight and Action: The Life and Work of Lion Feuchtwanger and Between Two Worlds: A Cultural History of German-Jewish Writers.