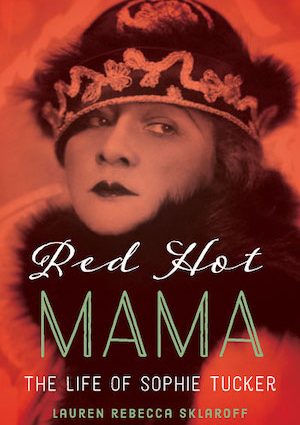 Join us for a virtual book talk with Lauren Rebecca Sklaroff

author of Red Hot Mama: The Life of Sophie Tucker

Legendary entertainer Sophie Tucker was one of the women featured in the JHS exhibit “Trailblazer: Connecticut Jewish Women Making History.”

The “First Lady of Show Business” and the “Last of the Red Hot Mamas,” Sophie Tucker was raised in Hartford and became a star in vaudeville, radio, film, and television. A gutsy, song-belting stage performer, she entertained audiences for sixty years. Tucker was a woman who defied traditional expectations and achieved success on her own terms, becoming the first female president of the American Federation of Actors. Dedicated to social justice, she advocated for African Americans in the entertainment industry and cultivated friendships with leading black activists and performers. Tucker was also a generous philanthropist, raising over four million dollars for the religious and racial causes she held dear.

Lauren Sklaroff, associate professor of history at the University of South Carolina, will talk about her recent biography, which places Tucker in the context of American cultural history.