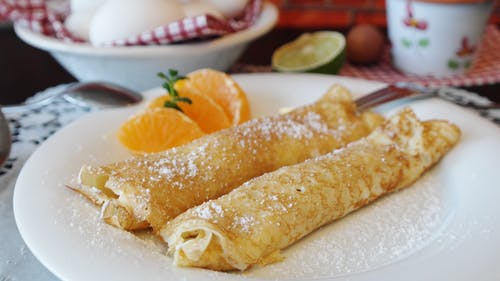 My mother made blintzes often, but she made small amounts at a time. When I think back, she had to use a lot of equipment to make the bletlach batter, cook the bletlach, make the filling, and stuff them and cook the final product. She had not entered the field of cryogenics (freezing).

My mother, children, grandchildren and I often baked together, but I realized that with such a team, we could make a lot of blintzes at a time and freeze them for when needed. So we adopted Henry Ford’s assembly line system. I made the batches of bletlach batter in the blender, my two granddaughters manned the bletlach pans on the stove, my mother and daughters made the filling (which had been brought to room temperature) and we all rolled. In a three-hour period, we could turn out well over a hundred blintzes. We did not cook them but we double-wrapped them for freezing and everyone took some home.

I have not made them in a while because it was very hard to find the 3+ pound of triangular-shaped farmer cheese that is necessary for the recipe, but I have since found a source. The hardest part, as we all aged, and my mother passed away, is finding a day that the very busy children and grown grandchildren can all come together. But it gets done.

As an alternative, I offer you a substitute recipe that has appeared in several of the synagogue cookbooks from the 70’s and 80’s that uses kosher frozen blintzes (Golden’s) and presents a meal appropriate for Shavout.

2 (13 oz.) packages frozen blintzes – cheese or fruit filled (Cherry, or Apple or Blueberry) – 12 in each package

Bake until top is slightly browned and center appears to be cooked.  Usual time is 45 minutes.

This recipe can be adjusted for smaller amounts by adjusting all the ingredients equally and adjusting the size of pan and baking time.