Although a synagogue structure is not necessary for Jewish prayer, the building of a synagogue represents the creation of a center for both worship and community. In a synagogue, Jews join together not only to pray, but to study, socialize, educate their children, and to care for the needs of their own members as well as the larger community. There were once thirteen synagogues in Hartford, CT. There are no longer any active congregations remaining in the city, although a number of the buildings are still in existence. Some are abandoned and have fallen into disrepair, and others have been repurposed, often as churches. This web exhibit utilizes the archive of the Jewish Historical Society of Greater Hartford to offer images and information on the synagogues that once existed in Hartford. 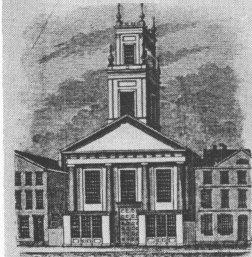 In 1856, having acquired for $28,000 the former First Baptist Church which was erected in 1830, the Beth Israel congregation renamed it Touro Hall in honor of Judah Touro of New Orleans, who had bequeathed $5,000 to Beth Israel, as he did to each of the other 13 synagogues then existing in this country. His generous benefactions extended to many other institutions, regardless of religion; and it was his contribution that made possible the later erection of Bunker Hill Monument.

As was the prevailing custom, the lower part of Touro Hall was rented for public meetings and stores. For many years Touro Hall was the only Hall in the city adapted to entertainments on a large scale, and most of the famous singers and actors of the day appeared there, among them Adelina Patti and the Booths. The hall, accommodating 1,500 people, was also rented out to Ararat Lodge, B’nai B’rith, and other organizations.

The first Hebrew teacher in Hartford was Lazarus Mosbacher. In his letter dated September 13, 1851, he reported to Rabbi Isaac Leeser of Philadelphia (editor of the Occident and Jewish Advocate and the first Jewish scholar in America to translate the Hebrew Bible into English) that there were 50 members affiliated with Congregation Beth Israel and 25 pupils in the religious school. 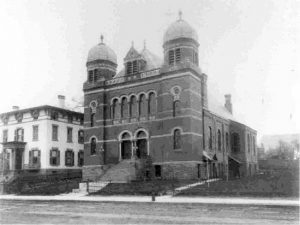 After a fire destroyed Touro Hall (the first synagogue site in Hartford), Congregation Beth Israel built the first building to be constructed in Connecticut for use as a synagogue on Charter Oak Avenue. Jewish congregations began to form in Connecticut in 1843 when the General Assembly took action to permit public worship by Jews for the first time. In the 1870s, Beth Israel became the first congregation in the state to have the size and financial strength to build. It would also be the first congregation in the area to transition away from its established Orthodox roots to join the Reform movement when it became affiliated with the Union of American Hebrew Congregations in 1878.

Designed by renowned architect George Keller, this building (depicted above, with interior to the right) was dedicated in 1876. An architectural landmark, it was home to the congregation until 1935. 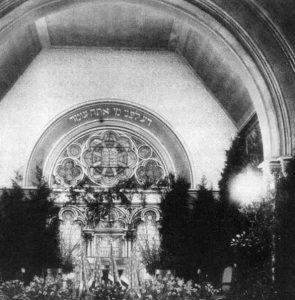 The large open interior seats 600 people in plain wooden pews. At the front are the recessed space for the ark and three stained-glass windows; the central rounder shows the Decalogue, while the flanking windows are quatrefoil-shaped columns with foliate capitals similar to those on the front elevation and support a blind arcade of three round arches under the windows. How this arrangement worked with the Tiffany ark enframement now at Temple Beth Israel, West Hartford, is not certain, but the Tiffany framework may simply have fitted around and over the permanent existing windows.

The second East European Orthodox congregation in Hartford was the Agudas Achim, whose official name was Agudas Achim Anshei Sefard, and which was commonly known as the Rumainishe shul (the Romanian synagogue). The “sefard” (Spain) in the official name refers to the fact that Romanian Jews were greatly influenced by the Hassidic movement, who used the Ari prayer book for worship. Since the compiler of that prayer book was of Sefardic origin, its use became known as nusach sefard (the prayer tradition of Spain). It is likely that the founders of Agudas Achim felt uncomfortable in the only other Orthodox synagogue, Ados Israel, and wanted to establish a synagogue that would use the prayer book in common use in their home country.

The congregation was officially established on October 4, 1887. Like other congregations of those days, it originally met in homes and rented halls. Newspaper accounts indicate that Agudas Achim held the 1897 High Holiday services in Turner Bund Hall; that it was incorporated on August 18, 1898; that its first president was Morris Kohenfield (Moshe Kornfield), and that its declared object was “to build and uphold a synagogue, to own a cemetery, and to provide the interment of members therein “without expense.” According to land records, Agudas Achim secured title to a parcel of land at 296 Market Street and, in 1902 or 1903, the congregation erected a synagogue in the rear of this dwelling.

In 1926, Agudas Achim bought property at 221 Greenfield Street and sold the Market Street building to the Hartford Courant on July 3, 1929. It was later razed as part of an urban renewal project. The congregation erected a new synagogue on Greenfield Street and dedicated it on September 9, 1928. In 1955, a new school wing and auditorium were added. In 1967, these facilities were leased to the Hartford Board of Education and Agudas Achim later erected a new synagogue and school at 1224 North Main Street, West Hartford. Rabbi Abraham N. AvRutick was the congregation’s Rabbi for 36 years starting in 1946.

Ados Israel was organized in Hartford by Orthodox Eastern European Jews in 1884 as the “Association of Brothers, Children of Israel”. The first listing of Association Ados Israel appears in the 1885 City Directory and indicates that the congregation worshiped at 3 Pratt Street until 1898.

One of the congregation’s early rabbis, Rabbi Cemach Hoffenberg, whose family came to Hartford from Lithuania in 1900, was highly respected in the community. He served as rabbi of Ados Israel Synagogue for 39 years and was on the boards of many local institutions until his death in 1938. His son, Samuel Hoffenberg, was a prominent Zionist and Jewish community leader for seven decades.

The Market Street building (1898) was an architectural gem (left) and reflected the financial success of its founders. This building was demolished as part of an urban renewal project in 1963. The congregation then relocated to 215 Pearl Street (right) and remained there until 1986, when it closed. An endowment for Jewish education was then established with the synagogue assets. In 1970, while the congregation was in its Pearl Street location, it had a

membership of 75 families. At that time, Jacob Baron served as cantor, but the congregation did not have a permanent Rabbi.

Kneset Israel, an Orthodox congregation was originally (1898) known as Congregation Israel of Koretz (or Anshe Koretz) because its members came from the city of Koretz in Russia. It became popularly known as the ‘Koretzer synagogue.’ Beginning in 1913, the congregation worshiped in a building on Suffield Street acquired from a Baptist church. A new synagogue, the last to be constructed in the North End of Hartford, was built in 1946.

In 1955 the congregation merged with Ateres Israel under the name Ateres Kneset Israel. A further merger, with Beth Hamedrash Hagadol, followed in 1962. The new synagogue adopted the name United Synagogues of Hartford and erected a new sanctuary and school on North Main Street in West Hartford in 1967.

Kneset Israel Synagogue is significant architecturally because it is an example of a vernacular building outside the tradition of Connecticut synagogue architecture. Kneset Israel is thus more like a contemporary “Yellow Brick” apartment design in materials and mass. However, decided effort was made to give the structure architectural features suitable for a house of worship, notably the tall arched windows of colored glass and the Judaic iconography.